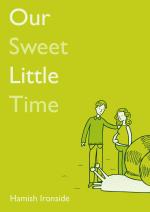 Hamish Ironside probably subtitled his book A Year in Haiku because most people have a vague idea of what haiku is. We remember it from school. We carry the term in the same vocabulary box as ‘sonnet’ and ‘limerick’. If Ironside had called his collection Our Sweet Little Time: A Year in Senryu, most people would have wondered where on Earth Senryu might be and, judging by the size of the book, how little there must be to do there. In actual fact, most of the poems in this richly entertaining and often very moving book are, to us sticklers, senryu.

These are small poems of the human heart and mind. Whilst haiku, by definition, would be more apt to deal with nature and the changing seasons – a job this little book does well as it follows the year in linear fashion – these poems address the very human issues of a year in a life. Hamish and his wife are expecting a baby and, thanks to the poems, we’re able to inspect they’re expecting. From January to December, the poet takes us on what he knows will be a very unique and often emotionally precarious journey.

There are bittersweet moments such as “in the charity shop / a Clanger and I / gaze at each other”- so extremely modern and so extremely British, yet so extremely embedded in the spirit of senryu. There are moments of deep yet carefully mined sorrow: “in a cold phone box / my wife’s sadness / muffled by traffic” and then refreshingly crystalline renderings of human nature: “I berate my friends– / then when my wife joins in / I defend them”. Thanks to the brief mutterings of these short poems we’re able to gain insight into the musings of a man who is being carried along by the tumbleweed of emotions that is his wife’s pregnancy. Pinballing from one emotion to the next, we get lost in Ironside’s foggy world via the clarity of his poetry: “at the doctor’s / her heartbeat crackling / like the moon landing”. There are quirky little illustrations, too, by Barnaby Richards, but not even drawings can beat the visual splendour of Ironside’s poems. As with the best haiku, the reader draws the picture.

For those of us who enjoy a good tale that tugs at the heartstrings, you could do worse than avoid the literary fiction section of your local bookshop and head over to the poetry shelf, where this little book may well be sitting (should your local bookseller understand the difference between quality poetry publications and The Nation’s Favourite Poems About Bathtime). If Basho managed to take us on a journey with his haiku, so Hamish Ironside has managed to twist our arms and persuade us to follow him down a very personal road, with not a moment lost along the way. And, even in its old age and thanks, perhaps, to the versatility of senryu, haiku, as a literary genre, has never been fitter.